On being a Champion

Allan Davis is a champion in every sense of the word. Known for his strong work ethic and sprinting ability, Allan started competitive cycling at the age of 10, and turned professional in 2002. Over the following twelve years he amassed more than 30 professional wins, with podiums in the World Championships Road Race and Milan San Remo.

To put these results into context, more than 85% of cyclists in the professional peloton never stand on the podium in a major UCI World Tour event. A champion is someone who has, in their own right, achieved great things and Allan has certainly done so.

A champion is generous with sharing their own deep experience and knowledge. I have been coached by Allan for the past three years, and I have been impressed by his willingness to give. He has tapped into his deep knowledge of cycling performance and crafted me a training plan and nutritional guide that has seen me reach the condition of my life. The plan is not just a cut and paste of what he has done in the past. Because a true champion has humility, and is willing to listen to the aspirations and challenges of others.

Allan has talked to me about my goals, about my family and work situation and has crafted an approach that is pragmatic and achievable. Recognising my own ability as a sprinter, he has encouraged me to do more gym and power training work to develop an ‘edge’ at the end of tough races. And it has worked – 90% of my victories over the past three years have come from sprint finishes.

The sharing of knowledge has gone far beyond the physiological aspects of racing a bike. With a pro career that stretches more than a decade, Allan’s insights on race craft and tactics are second to none. Early in our coaching relationship I raced the five stage Tour of Good Hope in South Africa, and each evening I was in contact with Allan discussing the following day’s stage profile.

On the third stage, a tough day with a mountain summit finish, Allan saw an opportunity. I was racing as an individual, sitting 8th overall, and all of the other contenders were racing as part of teams. He said that I should try a solo breakaway just before the base of the final climb with 6km to go, with the belief that the leading riders would be too busy watching each other to follow a guy far down on GC. I followed the plan, and won the stage – and in the process jumped to third on the General Classification. I finished the race on the podium.

Being a true champion is also about having the ability to give others a sense of self-belief, and to let go. Physiological condition and tactical nouse is nothing if an individual does not have the confidence to get things done. Allan travelled with me to the six stage Giro Sardinia, and followed me on every stage. And he literally followed me – riding a motorbike with spare wheels, water and food.

Allan was able to communicate through an earpiece or, when I was in the breakaway, by talking directly to me from the moto. He would tell me when to move up in the group before a climb, where to position myself to avoid strong side winds, and to keep my cadence high to reduce fatigue. And his message was consistent – whether in the individual time trial or the final kilometres of a gruelling mountain stage. The voice in my ear would be telling me “Mate, you can do this.”

By the final stage I was winning the Masters General Classification by a comfortable 1 minute and 20 seconds, and sitting 8th overall. I had made the day’s split, and was with a front group of about 30 riders. I could have just rolled into the finish and safely secured the Category GC win, but with 10km to go Allan rode up beside me and said “You can win this. Just use your head, and you can win.” He then dropped back and let me get on with it.

I didn’t win the stage, but I did come 3rd in the sprint against a fast finishing bunch of riders, many of whom were at least 15 years my junior. There were no words in the earpiece in the final few kilometres because Allan knew it was up to me – his job was done. You can see a video of the sprint finish here.

For me, a true champion is not just a winner in their own right, but someone who develops that winning spirit in others. A true champion is generous with sharing their knowledge, who gives others a sense of self-belief, but who is also able to let-go. Because it is not about them, it is about the success of the other.

Allan Davis has helped me to believe, and in 2019 I became European Champion. It might take some time, but we both believe that the rainbow jersey can be mine one day. And with many Masters cyclists still competing into their eighties, we’ve got at least another thirty years to keep trying!

But Allan has also triggered the desire in me to help others to achieve their cycling dreams and I’m now mentoring and providing guidance to several Masters athletes, which is something that gives me immense pleasure.

So maybe that is the ultimate definition of a champion: A true champion develops champions who aspire to develop champions. 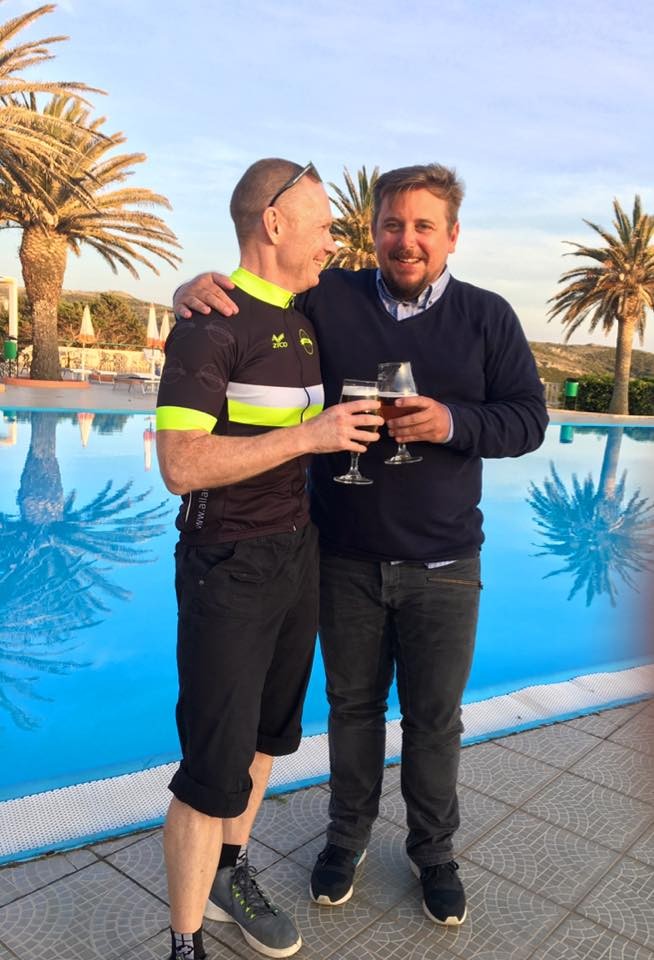