If we were to ask you to create a short list of living legends in the world of cycling, who would you name? Undoubtedly most of you would answer Eddy Merckx, Greg Lemond or maybe even Fabian Cancellara. But there is another person that should come to mind – Raymond Vanstraelen. And yet most people have never heard of him.

A man diminutive in stature but huge in achievement, Vanstraelen is a champion in every sense of the word. Born in Limburg Belgium in 1947 he started racing bikes in his late teens and celebrated over one hundred victories against the great riders of his era.

But having grown up in a working-class family of the post-war period, his parents discouraged him from turning professional and after his studies he took a ‘stable’ job with the State Owned RTT, the predecessor of today’s Proximus telecom company.

Raymond married at just 22 years old, and soon had a young son. But the fire for racing his bike was still with him, and alongside a full-time job and a young family he competed throughout his twenties.

The norm in the 1960s and 1970s was for elite cyclists to ride over six hundred kilometres per week, but Vanstraelen simply didn’t have the time. So he got creative, studying the training techniques of Olympic swimmers and athletic champions, and then adapted these techniques for his cycling training – with impressive results. He won against the Belgian “giants” of the era such as World Champion JP Monseré, sprinter Rik Van Linden and 4-times Paris-Roubaix winner Roger DeVlaeminck.

Vanstraelen “retired” from competition at the age of 29 to focus upon another growing passion – coaching others. With a curious mind and desire to find any way to achieve peak performance, he became more and more interested in biomechanics and the impact of rider position.

In the mid-1970s he worked together with a colleague at the RTT to develop the world’s first ever computer program for bike fitting. He recognised that many riders were having knee problems, something that his research from hands-on coaching linked to a combination of steep frame angles, too low saddle heights and poor fitting cycling shoes.

So he took an integrated approach – developing individualised and integrated “systems” for the riders that he was coaching. This involved working with frame builders to create truly made-to-measure bicycles, raising average saddle heights by 2-3 cm and creating bespoke insoles that were a radical departure from the flat-soled cycling footwear of the time.

This complete vision regarding the positioning on the bike evolved into a unique but universal measuring system – using newly emerging computer technology. Soon many of the best riders of the day were working with Vanstraelen, racking up scores of wins in Belgian and International events.

By the early 1980s he was even experimenting with wearable heart rate monitors developed by a relatively unknown Finnish company named Polar. His riders were amongst the first in the world to be coached using heart rate training techniques and combined with his progressive training methods and approach to biomechanics they achieved stellar results.

In 1985 Hennie Kuiper won the Milan Sam Remo under Raymond’s training guidance. Suddenly people were beating a path to Vanstraelen’s door for his coaching and bike fit services. He was able to charge 1000 Belgian francs (about 25 euros) for each individualised bike fit plan – a lot of money at the time. 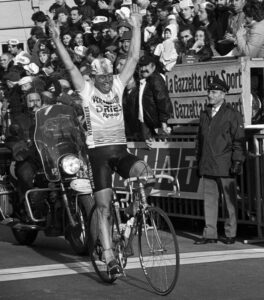 As a hobby that got somewhat out of hand, Bioracer was founded on December 31, 1985. The name Bioracer is derived from the term Biomechanics and racer and the logo is derived from the famous painting of Da Vinci: “Man is the measure of all things”, a phrase that has become the company’s motto.

In 1986-87 Vanstraelen started to become more and more interested in apparel comfort and the effects of clothing upon performance. He studied what was happening in the world of downhill skiing, visiting Switzerland to learn about a new wonder fabric called lycra.

This led to experiments with cycling apparel designs – which were made at home by his wife Anny Vanaken – which were lighter, more elastic, and breathable. The clothing was hugely popular with the riders he was coaching, and demand soared.

Throughout the first half of the 1980s Vanstraelen was running Bioracer alongside his full-time job at the RTT. But in 1988 at the age of 40 he and his wife Anny decided to take a leap of faith and focus on the company full-time.

The couple soon realised the potential for their innovative Bioracer cycling apparel. With Raymond responsible for design, testing and sales, Annie took care of production on her two Singer sewing machines in a spare room at their home.

Three of the Belgian riders coached by Raymond were competing with the Panasonic Isostar Pro Team, and they introduced Bioracer to team management who contracted the company as apparel supplier. 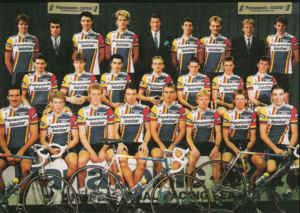 Within a short time more and more professional teams were racing with Bioracer apparel. Demand was so high that in 1989 Vanstraelen stopped coaching to focus upon growing Bioracer’s apparel business, and to allow more time for custom bike fitting – which was still very much a passion.

Vanstraelen increasingly came to understand that speed and performance of a cyclist depended on 3 things: biodynamics, aerodynamics and aquadynamics – and that the three aspects could not be considered in isolation.

But not everyone was convinced by Vanstraelen’s methods which were a radical departure from long-established norms of the cycling world. In the words of Vanstraelen “As an innovator you are always against something. Because you are trying to change things.”

In the late 1980s Raymond was drawn into a public spat with Eddy Merckx who was firmly in the traditionalist camp of bike fitting. But the results eventually spoke for themselves, and over the years Merckx has become a proponent of Vanstraelen’s methods.

Vanstraelen recalls a meeting of the Belgian Cycling Federation in the early 1990s to discuss the selection of apparel for the national team which at the time was using Merckx’s own apparel brand manufactured by an Italian supplier. Vanstraelen entered the meeting expecting a fight, but when the panel asked Merckx his opinion he simply said “We should use Bioracer. They are the best.”

Over the years Bioracer diversified into bicycle design and footwear, and even produced pedals and saddles. But since the early 2000s the company has focused primarily upon its core strengths in high performance apparel, bike fit and custom in-soles – and has built a world-leading reputation.

As the business became more global, Raymond realised that he needed stronger management. He stepped away from the CEO role to focus upon research and development, allowing others to take care of day-to-day management. Over the past decade he has spent more and more of his time on growing talent within the company.

Cyclists who have benefitted from Raymond Vanstraelen’s genius have accrued almost 1000 World Championship and Olympic victories, not to mention the countless Classics and Grand Tour wins. Raymond is still the “guru” for today’s current crop of professional athletes, providing personal service to the likes of Mathieu van der Poel, Greg van Avermaet and many other household names. 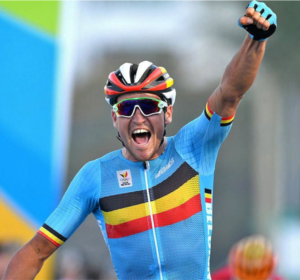 Today any cyclist who cares about performance – whether professional, amateur or a discerning recreational rider – can wear Bioracer apparel, have a custom bike fit, or be measured for custom shoe-insoles. Unsurprisingly, the company is seeing strong year-on-year growth.

At 74 years of age Raymond still sparkles with curiosity and a passion for innovation. His philosophy and values are the beating heart of Bioracer and he is at the company almost every day to pass on his knowledge and wisdom to others. “I still leave the office every day feeling happier than when I arrived” says Vanstraelen.

Raymond Vanstraelen embodies the true definition of a champion. Because a champion is not only someone who has achieved great things in their own lifetime but who has also helped others to thrive.

“We make you faster” is the Mission Statement of Bioracer today.