Mapei was one of the iconic teams of the late 1990s, dominating one-day races with the great Belgian and Italian classic specialists such as Museeuw, Bartoli, Tafi & Ballerini. And they took many of their victories aboard the Colnago C40, adorned with colourful cubes copied from Mapei’s product packaging.

The C40 name originates from ‘C’ for Carbon and ’40’ in recognition of Colnago’s 40th anniversary (1954 to 1994) & the model was in production for almost 10 years. It holds a special place in the heart of Ernesto Colnago – in interviews he has named it as his all-time favourite.

And for good reason – the model is recognised as one of the most successful race bikes ever, taking more than 1000 professional wins. It was ridden to victory five times in Paris Roubaix, in three World Championships & the Giro Italia.

But few people know that the C40 was actually the result of collaboration between Colnago & the Italian performance car maker Ferrari who’s partnership began in 1986 when Ernesto first went to Maranello to meet Enzo Ferrari.

In the late 1980s Ferrari was developing their own product with “40” in the name – the F40 super car. Along the way Ferrari’s engineers experimented with carbon fibre and became pioneers of composites and carbon joining processes.

Being Italian, an engineer and a bike racing enthusiast, Enzo Ferrari was more than happy to share his company’s expertise with his buddy Ernesto. They developed concept bikes together, pushing the boundaries of innovation and design.

The C40 was built using Ferrari’s production know-how to create carbon lugs that were bonded to carbon fibre tubes–in an impressive array of sizes and geometries. When the first model was released in 1994, it was the lightest production frameset in the world.

The success of the Colnago C40 in “The Hell of the North” Paris-Roubaix proved to the sceptical cycling industry that carbon frames were not only light and stiff, but extremely tough – not a single frame failed over the punishing cobblestones of the event.

We now know that some of the Mapei riders of the mid-1990s were being powered by more than carbon fibre – but their successes at the time aboard the C40 saw the Italian brand reach new heights.

Within just a few years carbon replaced steel and aluminium as the material of choice for performance race bikes. And Colnago was one of the few Italian frame builders to successfully make the transition to the new technology in the face of increasing competition from the USA and Asia.

With such an incredible history, the C40 in Mapei colours is one of the most sought-after race bikes in the world for serious collectors – even Bradley Wiggins has one.

And of course, that’s why we have one too. You can ride it if you come for a visit to the Flandrien Hotel. 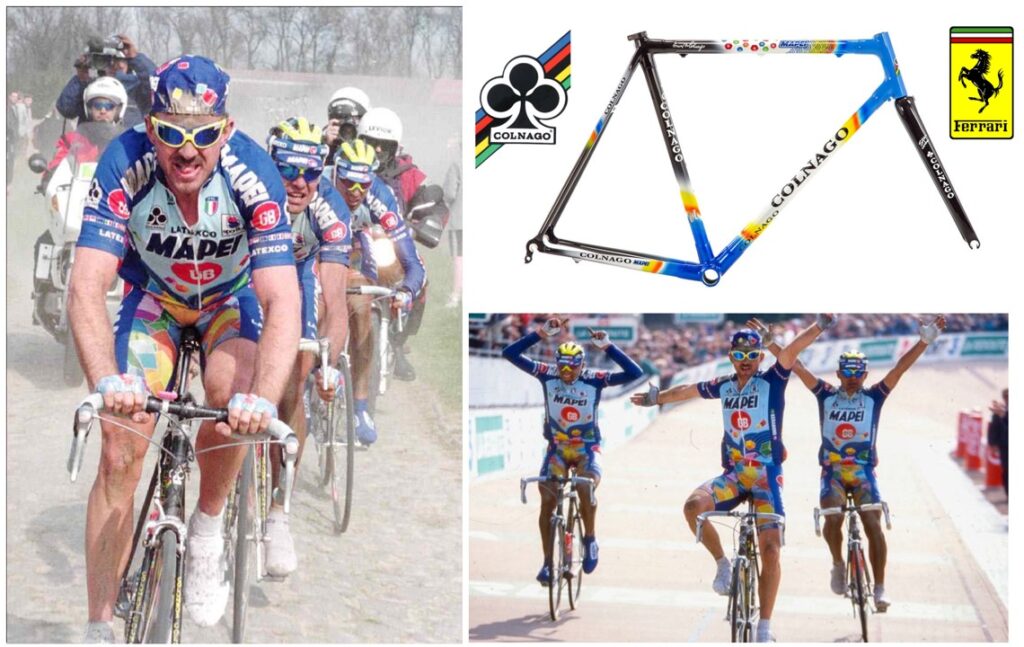