Introduced in 1991 the LOOK KG196 was a radical creation of carbon kevlar, ceramic and aluminium that made other bikes in the pro peloton look positively obsolete.

Unlike most earlier carbon framesets that were made from carbon tubes that were glued into aluminium lugs, the KG 196 was bonded by heat & pressure in a mould. And the result was not just aesthetically stunning, it was also brimming with innovative design elements.

The new manufacturing process enabled the creation of a variety of shapes, which was key to aerodynamic evolution that over subsequent years LOOK would take in an increasingly radical direction.

To achieve the best possible aerodynamics LOOK engineers created a massive oval down tube. The seat stays had small “shoulders” to better channel the air around the rear brake, and the seat tube curved to create the smallest possible gap between the frame and rear wheel.

LOOK’s newfound aerodynamic obsession tipped over to an integrated straight bladed fork, with a narrow frontal profile that was connected to the frame by a single pivot and an elastomer vibration dampening element. The frame was one of the first to feature internal cable routing throughout.

The result of all that innovation was an incredibly stiff frame with industry leading aerodynamics and excellent power transfer. At around 9kg it wasn’t especially light, but many professional teams used the KG 196 including ONCE, Novemail and Festina.

And they raced the bike with real style – the early 1990s was a period of funky jerseys, big sunglasses and flowing hair unrestrained by helmets.  Multiple Aussie national champion Neil Stephens competed for the Spanish Team ONCE from 1992-1996, with many of his wins astride the coolest bike in the peloton – the 196.

Unfortunately for LOOK, the radical monocoque designs that began with the KG196 started to worry the world governing body of cycling, the Union Cycliste Internationale (UCI).

Designers like the UK’s Mike Burrows who were inspired by LOOK’s lead had taken aerodynamics to a whole new level in the mid-1990s with bicycles like the LOTUS Type 108 that completely did away with the traditional diamond frame design consisting of paired main and rear triangles.

The Lugano Charter penned by some UCI boffins in Lugano, Switzerland, in October 1996 was designed to uphold a rather noble ideal: Cycling should be a sport of athletes, not machines.

Bikes should look like bikes and not like big flowing blobs of carbon.  The result was that innovation came to a screeching halt and bikes like the LOOK KG196 and even more radical KG296 were banned from use in competition. 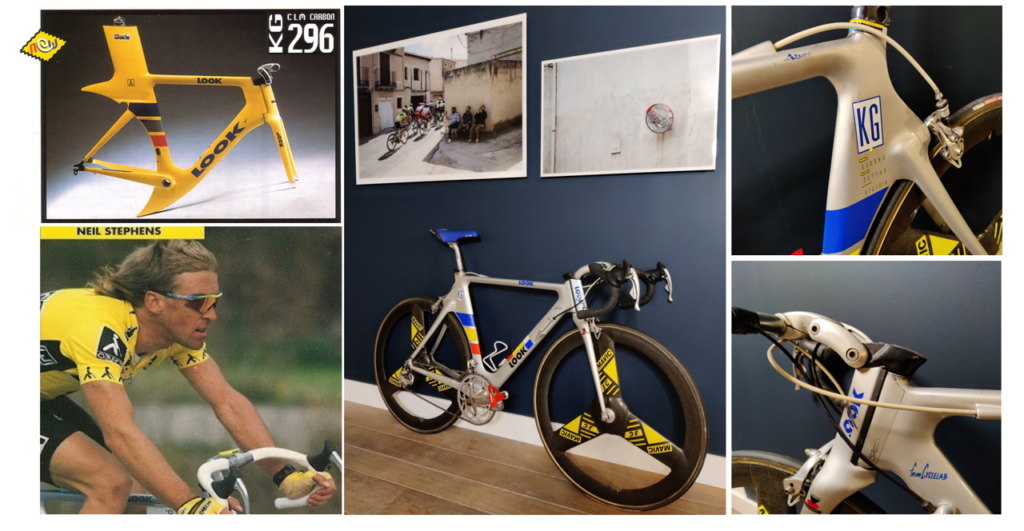