The name ‘TIME’ conjures up images of French handmade works of art and the elegance of carbon, lugged frames. And the most legendary TIME bicycle of all just has to be the VXRS Ulteam as ridden to World Championship victory by Tom Boonen in 2005.

When you first look at the VXRS you see the lugs and notice straight away that the frame is different from the now-conventional crop of moulded monocoque types. It is a very special bike, due in part to TIME’s patented Resin Transfer Moulding construction process.

TIME was the only manufacturer to use the technique, a three-step process which combined the use of in-house tubular woven layers of carbon with a pressure-injected-resin moulding. Here is the remarkable process in operation in 2008: https://lnkd.in/e6CSvYhD

It was labour intensive and expensive – a frameset sold for an eye watering US$4995 in 2005 money. But you got a fat carbon Ulteam head stem, headset and some TIME bottle cages too. And you certainly stood out from the crowd.

TIME’s unique manufacturing process resulted in what was widely recognised as the best handling race bike of its generation. My friend Michael Rogers competed on one, and he still raves about it more than 15 years later!

The VXRS was the machine of a young Bradley Wiggens and the Cofidis Pro Tour team. The bike of Bouygues-Telecom and Quickstep, who’s Paolo Bettini also took World Championships victory on the bike in 2006.

The VXRS that we have in our Flandrien Hotel collection is very special indeed. It was created to celebrate Boonen’s 2005 World’s win and even has his signature on the top tube.

Boonen’s palmares is long and distinguished. He sits tied for the record number of wins in both cobbled monuments, having matched Roger De Vlaeminck in Paris-Roubaix (four wins) and five others in the Tour of Flanders (three victories). And he also had six Tour de France stages to his name.

It all came with a charm and friendliness rarely seen among cycling’s superstars. Because of this Boonen is warmly regarded as one of the most likeable and humble “Flandrien” of his generation.

And that’s why he also has a special place in our Flandrien Art Gallery, with a beautiful artwork created by John Mettepenningen who is known as the “Andy Warhol of Cycling.” You can see it here: https://lnkd.in/eFewpUXA

It’s no surprise that the Tom Boonen World Champion TIME VXRS Ulteam is the most admired bike at the hotel.

And the best part – TIME bikes are still making bicycles in Europe today. So just like Tom, Bradley, Michael and Paolo, you too can ride a piece of beautiful French carbon artistry. 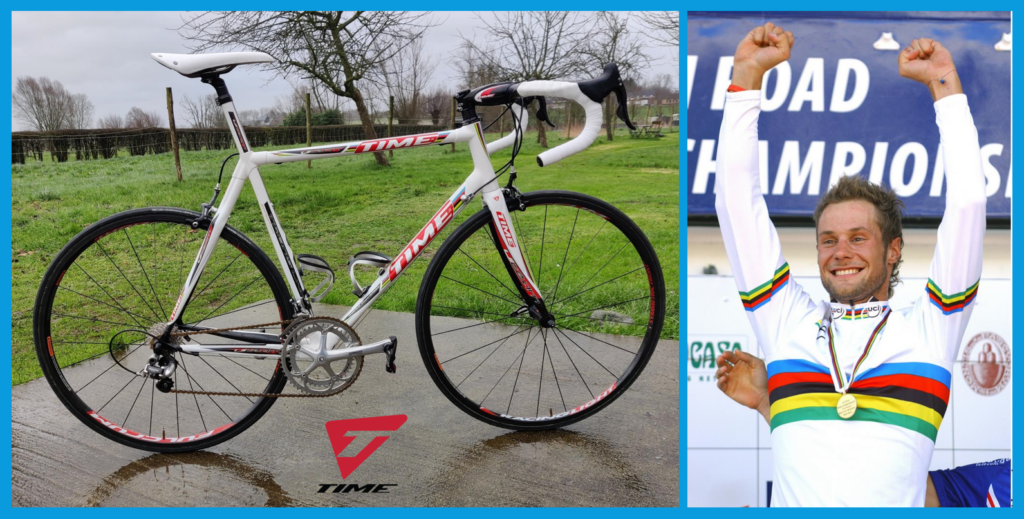