In 1972 Italian engineer Falconi Lodovico founded ALAN, the first company in the world to design and mass produce an all-aluminium bicycle frame. And not only were ALAN bikes cutting-edge technology for their time – they came in uber cool anodized colours too!

The name ALAN comes from the first two letters of the Lodovico’s children, Alberto and Annamaria. The company’s frames were constructed with a unique method that involved bonding aerospace grade aluminium tubes and lugs using a special epoxy adhesive.

Lodovico collaborated closely with teams and champions on the amateur and professional levels. Over the years his firm’s frames were ridden to 20 cyclo-cross world championships titles, 5 track world championships, numerous one-day classics wins, as well as Grand Tour stage victories. ALAN also supplied finished frames for makes such as  Concorde, Guerciotti and Colnago.

The company’s bicycles were ridden by iconic road cycling teams such as Magniflex, Selle Royal, Café de Colombia, Fanini and many others. And a piece of trivia – Gary Wiggins, the father of Sir Bradley Wiggins, raced on an ALAN bike with Belgian-licensed team Fangio – Marc – Ecoturbo in 1984 and 1985. Better known for his track results, Wiggins senior also raced to a number of pro Kermis wins aboard his aluminium steed (see image of Gary below).

Due to their light weight, ALAN frames were very popular in cyclocross events where riders had to frequently shoulder their bikes. Cyclocross legends like Zweifel, Liboton, Stamnijder, Di Tano, Simunek, Thaler and Kluge all competed on ALAN, and in 2012 a young Mathieu Van der Poel achieved his first World Junior title aboard the Italian brand.

The Flandrien Hotel’s immaculate ALAN Super Corsa LS from the late 1980s utilized a unique patented construction system of threaded tubing and lugs joined with epoxy – not brazed or welded like a traditional steel frame.

Early ALAN frames had a reputation for flex but objective comparison of the top models showed that they were equally stiff to a steel frame constructed from Columbus or Reynolds tubes – at least when they left the factory. However the adhesion of the tubes and lugs could degrade over time, so we don’t allow our Super Corsa to be ridden on the harsh cobbles of Flanders.

As with many other iconic European marques, the ALAN lost it’s way somewhat in the 1990s when it failed to keep up with the pace of innovation being set by American & Asian competitors. The firm focused on the niche market of cyclocross, and largely disappeared from the pro road peloton.

This year the company created by Falconi Lodovico celebrates its “golden” anniversary. ALAN is much smaller today than it was in its heyday of the 1970s and 1980s but remains in the hands of the founder’s children– one of the very few iconic Italian brands that has survived as a family-owned firm.

After 50 years in business ALAN is still proudly independent and produces beautifully crafted road, gravel and cyclocross framesets from both aluminium and carbon fibre. 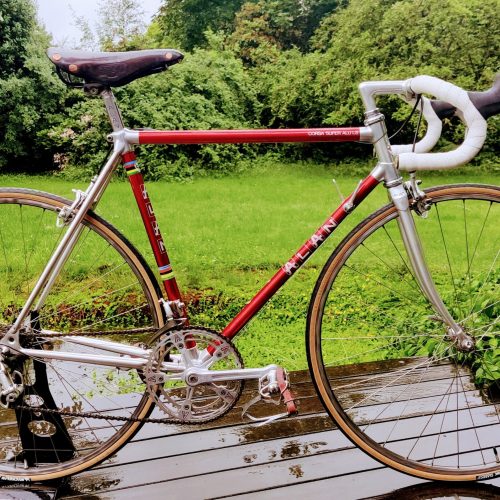 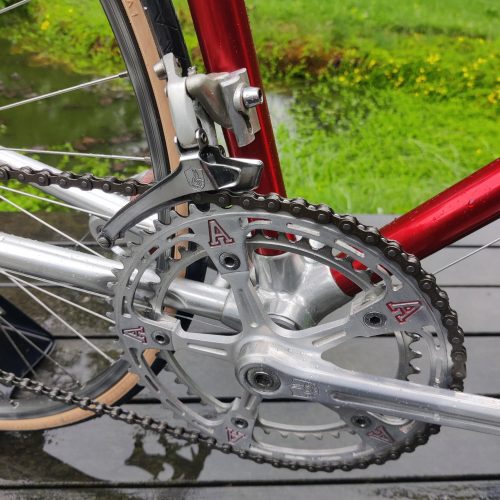 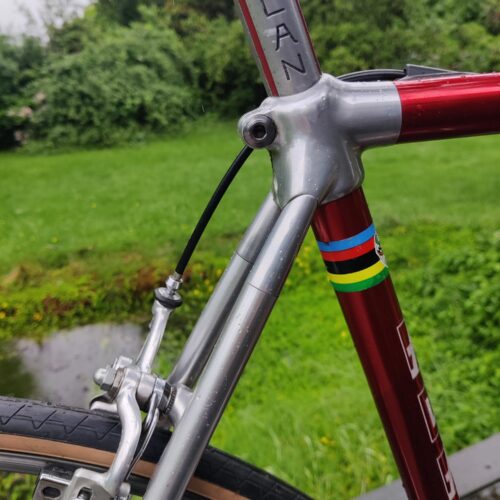 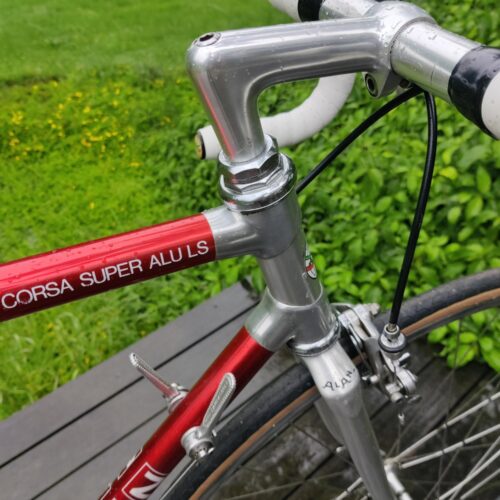 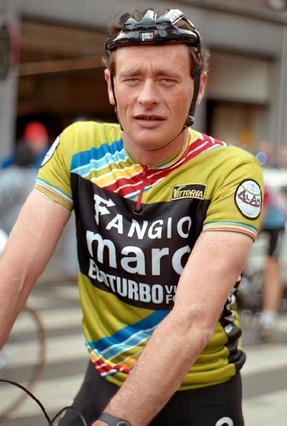 Every now and then we find an exceptionally rare classic bicycle for our collection. And this custom “Made in the USA” Saeco Team Cannondale CAAD Time Trial bike really fits the bill! And not only is it rare – it looks absolutely awesome!

Cannondale was founded in 1971 by Joe Montgomery and Murdock MacGregor who made everything from prefab concrete houses to engines, bicycle trailers and pannier bags.  Joe was a big fan of bicycle touring and frustrated by the bicycle offerings on the market he decided to make his own.

The ST500 was the first model launched by Cannondale in 1983, and although it was aimed at bike packers it revolutionized the biking industry by using a special aluminium welding process. In 1992 Cannondale used computer aided design to make a new aluminium frame weighing only 1.2 kgs and created the CAAD moniker (Cannondale Advanced Aluminum Design).

In 1997 the CAAD3 road frame was debuted. Cannondale was already big in MTBs, but with the launch of the CAAD3 the company undertook a major shift in the attention it paid to its road bikes. During a meeting at a Tuscan villa, then CEO Scott Montgomery (the son of founder Joe Montgomery) sat down with Italian businessman Sergio Zappella and made a deal to sponsor his Saeco road team.

The deal cost Cannondale $500,000, and many thought Joe was crazy as it was one the biggest bike sponsorship deals every signed. But it turned out to be a smart investment with the superstar Mario “Lion King” Cipollini on the team.

But there was a problem – Cannondale didn’t make Time Trial bikes. So the company’s designers had to get to work creating CAAD TT frames for each of the team’s riders – and fast! The bikes that they created were radically different to any other Cannondale available and were only custom made and team issue.

All of the Saeco team’s custom TT bikes were made from laser cut 6000 series Alcoa “Alcalyte” aluminium tubing with TIG welding. The frames were heat treated for retention of strength, hand sanded and finally electrostatically painted.

The original team-issue model that we have in our Flandrien Hotel collection was used during the 2000 season, built with the newly released Campagnolo Record 10s groupset and an uber cool integrated Cinelli Angel stem and handlebar. It still looks amazing almost a quarter of a century after it was created.

Cannondale made loads of money selling bicycles well into the mid 2000s – until they decided to make motorbikes and rapidly went bankrupt.

The brand still exists today and still makes awesome bikes. But it is no longer in the hands of the founders and alas, the “Made in the USA” sticker has disappeared. 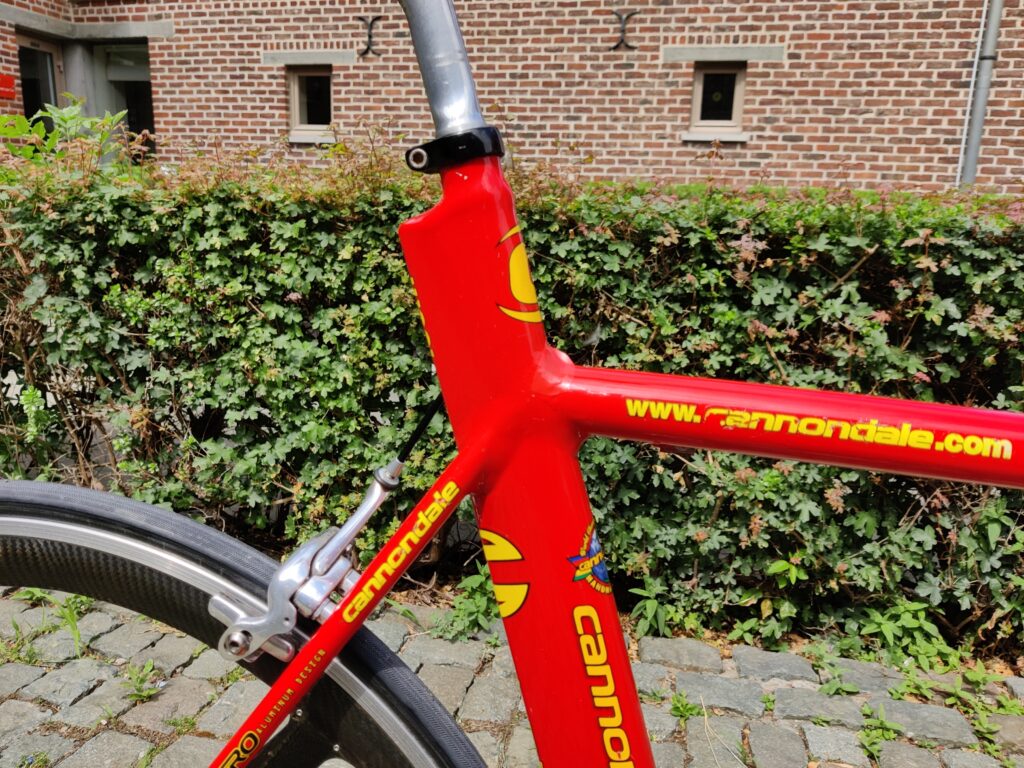 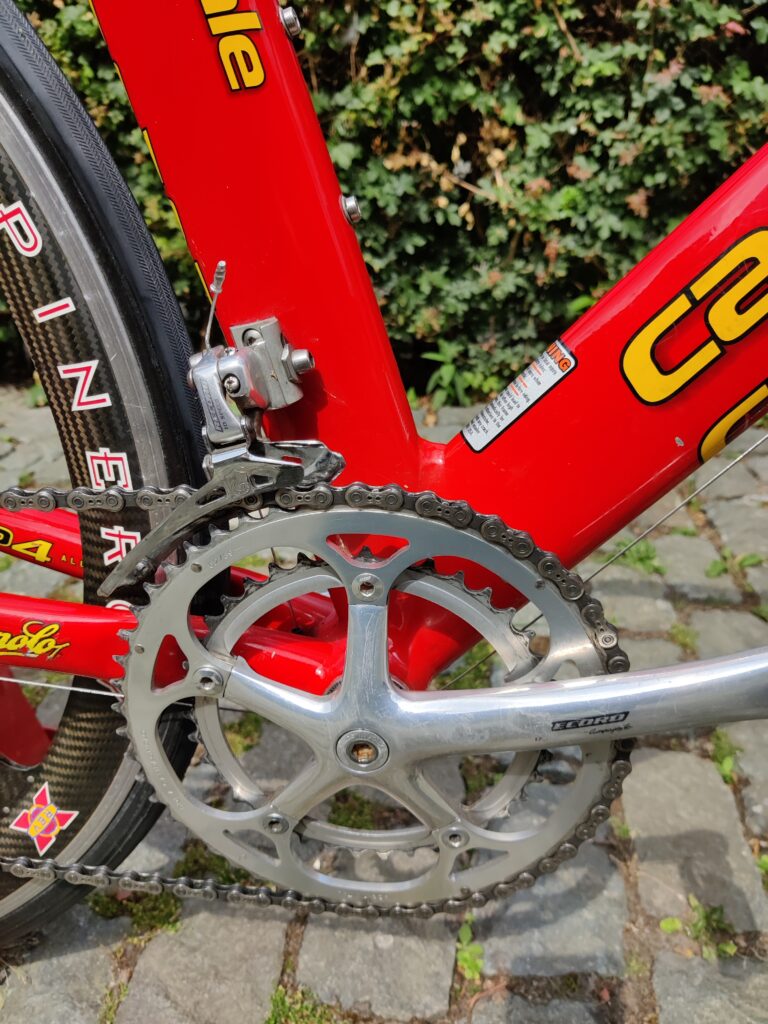 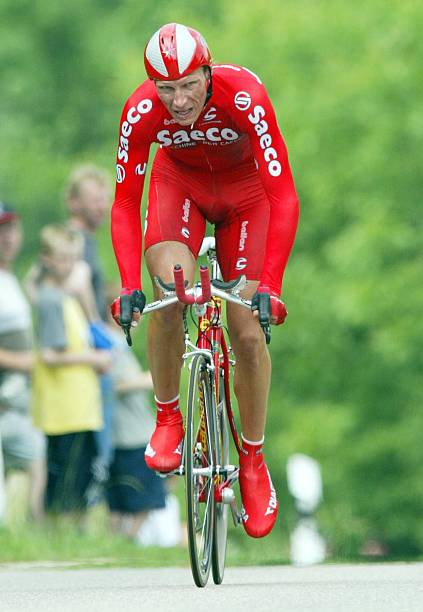 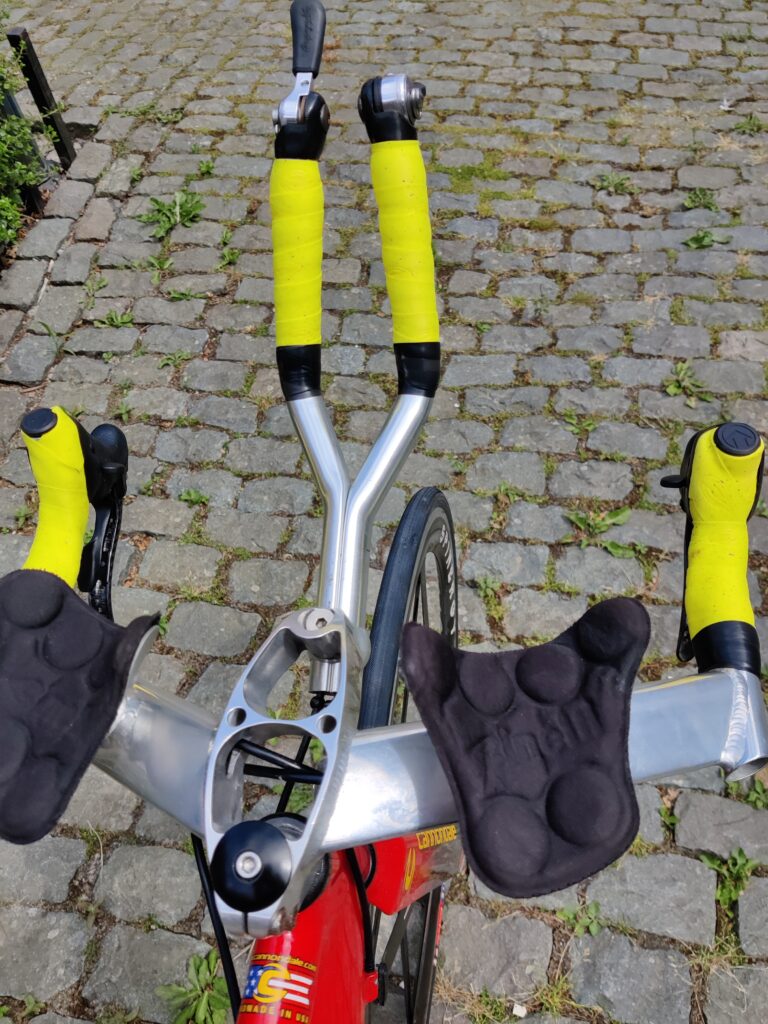 Our Chesini Innovation from 1992 is a stunning example of Italian craftmanship with a sloping geometry that was unusual for road bikes of the period. And something surprising – the frame was painted right here in Flanders!

The name ‘TIME’ conjures up images of French handmade works of art and the elegance of carbon, lugged frames.

And the most legendary TIME bicycle of all just has to be the VXRS Ulteam as ridden to World Championship victory by Tom Boonen in 2005.

The name ‘TIME’ conjures up images of French handmade works of art and the elegance of carbon, lugged frames.

And the most legendary TIME bicycle of all just has to be the VXRS Ulteam as ridden to World Championship victory by Tom Boonen in 2005.

Mapei was one of the iconic teams of the late 1990s, dominating one-day races with the great Belgian and Italian classic specialists such as Museeuw, Bartoli, Tafi & Ballerini. And they took many of their victories aboard the Colnago C40

Introduced in 1991 the LOOK KG196 was a radical creation of carbon kevlar, ceramic and aluminium that made other bikes in the pro peloton look positively obsolete.

The Flandrien Hotel’s beautiful Trek 5200 OCLV from 1992 embodies some big cycling industry innovations – and remained almost unchanged for a decade.

The Dogma name was first used on a Pinarello magnesium frame way back in 2003, a material the Italian company clung to for just a few years

The Giant MCR (Monocoque Carbon Race) was designed by the genius bicycle engineer Mike Burrows – but eventually banned by the UCI.